Little Chushul Cthulhu in the Mansion

During his travels with the dirigible Le Comte Caspar has researched the most faraway regions, travelled through foreign countries and experienced a lot of adventures. Again he was on the road to research the Oktopelius, but after he apparently had flew over the seashore for what looked like an eternity without having any success, he now returns exhausted to the mansion, where he can rest after the journey.
It has been a few days now since he’s back. The dirigible is unloaded and lies waiting at the docks until the next assignment. Le Comte studies the maps of this earth and worlds further away. He thinks hard about the next destination, he would like to travel to. The Oktopelius Piratopus is up to mischief again. Sure, the Blubber Brigade is prepared and is expanding continuously, but until now it hasn’t been possible to get more information about this species, let alone catch a living specimen.

Strange things happen at the mansion. Bastille slowly starts to doubt his own sanity. He hears unusual noises and when he turns around, he sometimes sees a green thing disappearing behind the corner. But when he tries to follow it, nothing’s there. That alone was already disturbing, but since recently the pillows on the chaise longue are moving by themselves and the sheets in the wardrobe are ,without any cause, getting in a state of disorder, the feeling that something is wrong only got stronger. 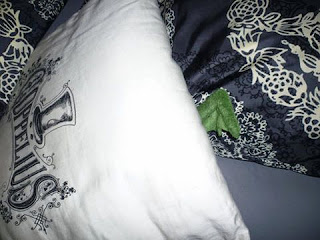 Not so long ago Graf Lindorf went into the wine cellar for a special bottle of wine. The Graf wanted a particular bottle. The time he would have needed to explain the servant which one he needed, would have taken more time than to go and get it himself. But the moment he opened the cellar door, he heard a tumultuous ‘flap flap flap’. Dust whirled up and in no time the whole room was filled with this dust that was already lying on the bottles for ages. A strange shape, that the Graf had never seen before, became visible at the ceiling. He reached for it, but it was already gone. The Graf had to close his eyes because of the dust and swore. It would take for ever until it would be possible to read the etiquettes again. With a deep sigh he decided to use another method to find this one bottle. The only thing he could do was try. 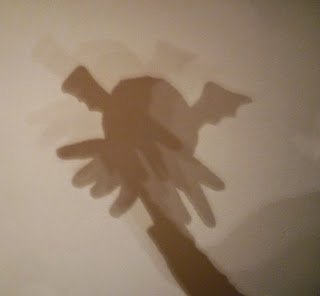 A few days later the somewhat tired looking Graf Lindorf saw the Comte. He was looking even more exhausted than himself. To find the bottle of wine he had to try more than he had expected. He asked the Comte why he looked so tired. The answer he got was a grumbling “I will get that beast!” The Graf looks while shaking his head how the Comte shuffles trough the hallway and decides that the next time he will ask the servant.

Comte Caspar on the other hand is on his way to professor Mosch Terpin. A few days ago he was the victim of an attack during the night. Abruptly woken he could just barely free himself from several tentacles and put on the light. He was just able to see a green thing rushing above his head and flying away through the window. 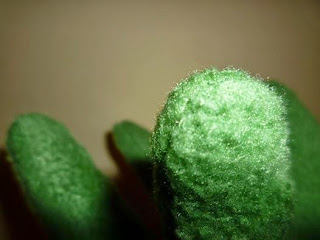 Since then he hadn’t slept for three nights in a row, hoping to surprise the beast and be able to catch it. But it turned out to be very smart. One could hear it flying in front of the window “flap….flap…” But as long as the light is turned on, it doesn’t come in to the room.

Now the professor has to help. Caspar describes his problem and requests the professor to build a device to catch the chiropteran. It is very urgent. The Comte is overtired and determined to stop the cuddle attacks. Luckily the last arrow of the crossbow is already used up, otherwise the whole mansion would have been in a state of uproar again. That very night the professor gave the Comte a strange looking grabbing device with a built-in floodlight. This should help to catch the creature. Thunderously the Comte went to his room and waited for the darkness and the appearance of the cuddle monster.

When Bastille the next morning entered the room to wake the Comte, while he hadn’t responded to the several knocks on the door, a strange sight was waiting for him. Monsieur Le Comte was lying dressed in his bed, his arm hanging down at one side holding a strange device, on which a sort of grip arm is fixed. Next to him on the bed sits a creature that has never seen before in the mansion. 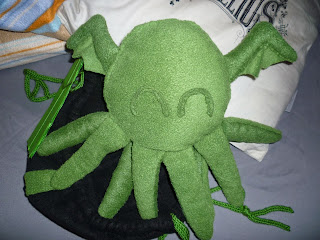 It purrs happily and flaps gently with its wings as a greeting.

A phone call and a few hours in the library later and everything is clear. The creature is the so-called Chushul Cthulhu, a very old species. In fact a very nice animal, but there are a few rules one has to bear in mind, when communicating with it.
Fortunately Le Comte has some good contacts and is able to retrieve the rare writings, which describe what one has to do, when meeting the little one. 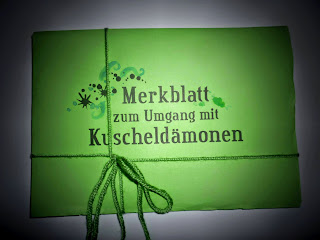 But one thing is clear: The catching device wasn’t needed anymore since the night of the first encounter. The little Chushul Cthulhu is totally fallen in love with Comte Caspar and doesn’t leave his side anymore. Caspar on the other side has to memorize the rules whether he wants to or not and has given Bastille the task to hang sings in the house. 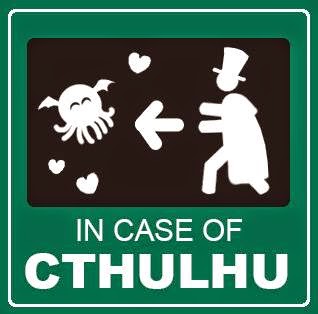